I gave up Facebook for Lent. The funny thing is, I’m Buddhist. Well, raised Buddhist. Anyways, as I was trying to get my kids to eat their dinner, I was on Facebook reading about what my friends were feeding their kids. It suddenly occurred to me that I had been spending too much time there and needed to prioritize. So, I instantly deactivated my account.

I felt completely liberated the first day without Facebook. I was free of the need to come up with witty status updates, free of the ‘obligation’ to share good information, free of the curiosity of what my friends were up to.

The second day, I still didn’t miss my friends. I missed the information I get from the pages I “like.” I never realized that Facebook had been my primary source for the news and topics I cared about. Right after I deactivated my account, I read an article that Facebook was now the biggest news organization in the world. Great. I gave up Facebook for Lent and won’t be signing in again until Easter. What was I to do?

Immediately, I was overwhelmed by the many 140 character bits of information from the 89 people, companies, groups that I had initially started following. Was I following too many or were too many Tweeting too much? I cared about all of them, but who do I stop following?

John Stone wrote, “think quality versus quantity” when it comes to blogs. Truly, the same applies to Twitter, Facebook, and other social media sites. Especially for business and organizations, the quality of the posts and the information shared needs to be thoughtful and valuable to maintain the interest and keep the trust of their followers. Too much information creates follower fatigue. That’s what happened to me on Facebook. In one day, I was beginning to happen with Twitter.

I like my news. I like getting them via social sites. We advise our clients to value an editorial perspective and a careful selection of relevant posts. I hope the companies and groups I follow on Facebook and Twitter do the same. 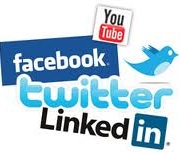 Social Media Presence – How RIA’s Can Spread the Word

Are your contacts "Rapportive-ing" You?

Thanks Reid Hoffman and LinkedIn – from User Number 104,302

Using Symbols and Doubling Open Rates ✔ It Out!