Below are some interesting facts and opinions about Facebook curated from the current Economist article. 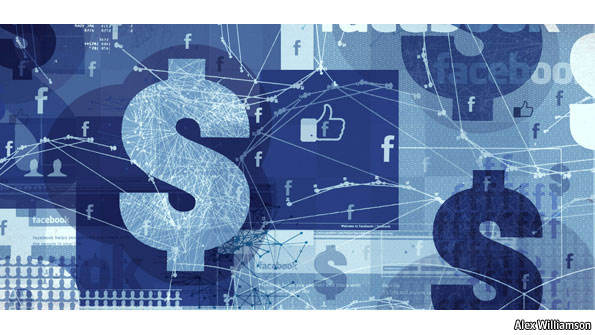 “Last year the company had sales of $3.7 billion, a little below recent estimates, and made a net profit of $1 billion.”

“The network boasts 845m users, which, were Facebook a country, would make it the world’s third most populous, behind China and India.”

“Every day 250m photos are uploaded to the site. One out of every seven minutes spent online is on Facebook, according to comScore, a research firm.”

“Facebook accessible to ever more people. (The Boston Consulting Group reckons that around 3 billion people will be online by 2016, up from 1.6 billion in 2010.) The second is the rise of the mobile phone. Already more than 425m people are tapping into Facebook on these devices and in future most of the social network’s growth will come from the mobile web. Together, these trends could propel the number of users beyond 1 billion.”

“People are now spending far more time on Facebook than on rival web services such as Google (see chart 2) and why it has benefited from strong network effects. ”

Another interesting perspective- will a new hot social network take over? Tumblr? Twitter?

“One is that people stop using Facebook, either because they lose interest or because they are put off by its behaviour. As News Corporation discovered to its cost after it splashed out $580m on Myspace in 2005, network effects can also go quickly into reverse. Once large numbers of people started leaving the service, which became more cluttered than a teenager’s bedroom, it proved hard to stem the tide. Last year, News Corp sold the business for just $35m.”